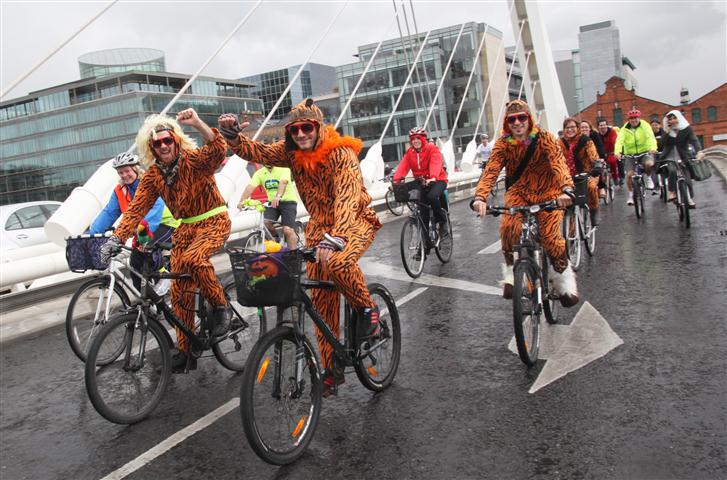 Despite the rain, over 1,250 cyclists working in and around Dublin joined Minister for Public & Commuter Transport Alan Kelly TD, to put their foot on the pedal for Dublin’s Bike to Work Day on Wednesday, 22 June.

Gathering for the 1pm cycle in Grand Canal Square, the ‘thousand plus’ cyclists took a spin around the city to promote health, fitness, money saving and stress free travel. 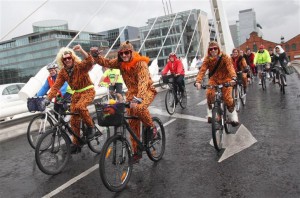 Dublin City Council’s public “Lunchtime Bike Ride” initiative consisted of a 30 minute leisurely cycle through the streets of Dublin, taking in the Samuel Beckett Bridge, City Quay, Merrion Square, The Pepper Canister Church and part of the new Premium Cycle Route along the Grand Canal. The cycle concluded at Grand Canal Square, with food market stalls available so cyclists could grab a quick bite of lunch before returning to work.

Ciaran Fallon, Bike Officer, Dublin City Council speaking about the event said; “Dublin City Council are thrilled with the response to the event and are asking everyone based in or around Dublin city centre that cycles, has access to a bicycle or is part of Dublin Bikes, to cycle in the city more regularly and enjoy Dublin’s cityscape”.

Minister for Public and Commuter Transport Alan Kelly said: “This has been biggest and best bike week yet. There are huge advantages to cycling so the message to people who live close to their work or school is leave your car at home and get on your bike – it’s better for your health, better for traffic congestion, better for your pocket and better for the country overall.”

Prizes for best dressed male, female, bike and company were presented following the cycle along with the raffle prize of an Apple iPad for one of the lucky cyclists, Noel Rushe!

Further information on cycling in Dublin from www.dublincitycycling.ie.