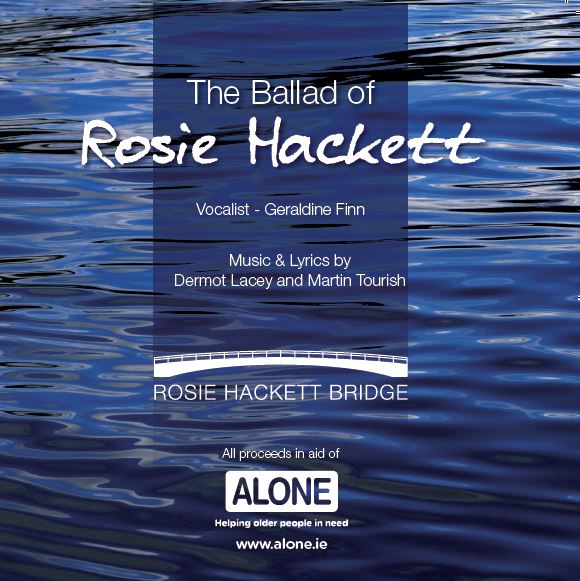 ALONE, the charity that cares for older people in need, has released a new charity single titled The Ballad of Rosie Hackett. Inspired by the new Rosie Hackett Bridge spanning the Liffey, the song was written by Councillor Dermot Lacey, composed by Martin Tourish and the beautiful vocals were provided by Geraldine Finn.

CEO of ALONE, Sean Moynihan said, “All money raised from the sale of The Ballad of Rosie Hackett will directly fund vital services for older people. We are truly thankful for the time, efforts and talent of Dermot, Martin and Geraldine, their support is really appreciated. We hope that people will make an effort to take two minutes from their day and download the song from iTunes in support of ALONE”. 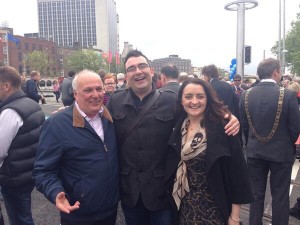 In May of this year, the new bridge over the Liffey, The Rosie Hackett Bridge, was officially opened.  Councillor Dermot Lacey was the head of the naming committee and did a wonderful job involving the public and considering people from some many walks of Dublin life.

The five names that made the final shortlist for the naming of the bridge were; Bram Stoker, Rosie Hackett, Kay Mills, Frank Duff and founder of ALONE, Willie Bermingham. Motivated by Rosie, the woman who founded the Irish Women Workers Union, head of the naming committee Councillor Dermot Lacey put pen to paper and wrote a ballad. Having written the song, Councillor Lacey drafted in Geraldine Finn, a singer from Co. Galway to sing the vocals and Martin Tourish, a Dublin-based accordionist, composer and producer, originally from Co. Donegal to compose the track. 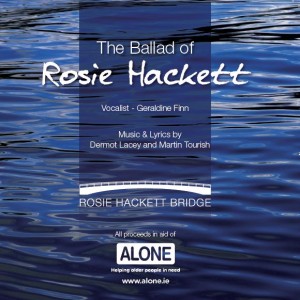 Councillor Lacey felt that it would be a fitting tribute for all proceeds from sales of The Ballad of Rosie Hackett to go to ALONE, the charity founded by shortlisted Willie Bermingham. With the finished track, he approached ALONE and generously signed over full copyright of the song to the charity.

Labour Councillor Dermot Lacey said of the track, “I hope that over the years these two great Dubliners, Rosie Hackett and Willie Bermingham, will be forever associated and that ALONE can raise some vital funds to help fund services for older people from the sale of this song”.

The Ballad of Rosie Hackett is available for download on iTunes for $0.99. https://itunes.apple.com/us/album/ballad-rosie-hackett-single/id900106716

ALONE can be contacted on (01) 679 1032 for those who have concerns about their own wellbeing, or the wellbeing of a vulnerable older person in the community or visit www.alone.ie

ALONE invites collaboration from other organisations to tackle loneliness

‘Together celebrating and connecting older people in our communities with ALONE’

‘We owe it to our older people’

Baz launches ALONE & An Post’s ‘Do One Thing’ Christmas Campaign

ALONE thanks Gavin James and the public for raising an astonishing €160,000 in support of their services