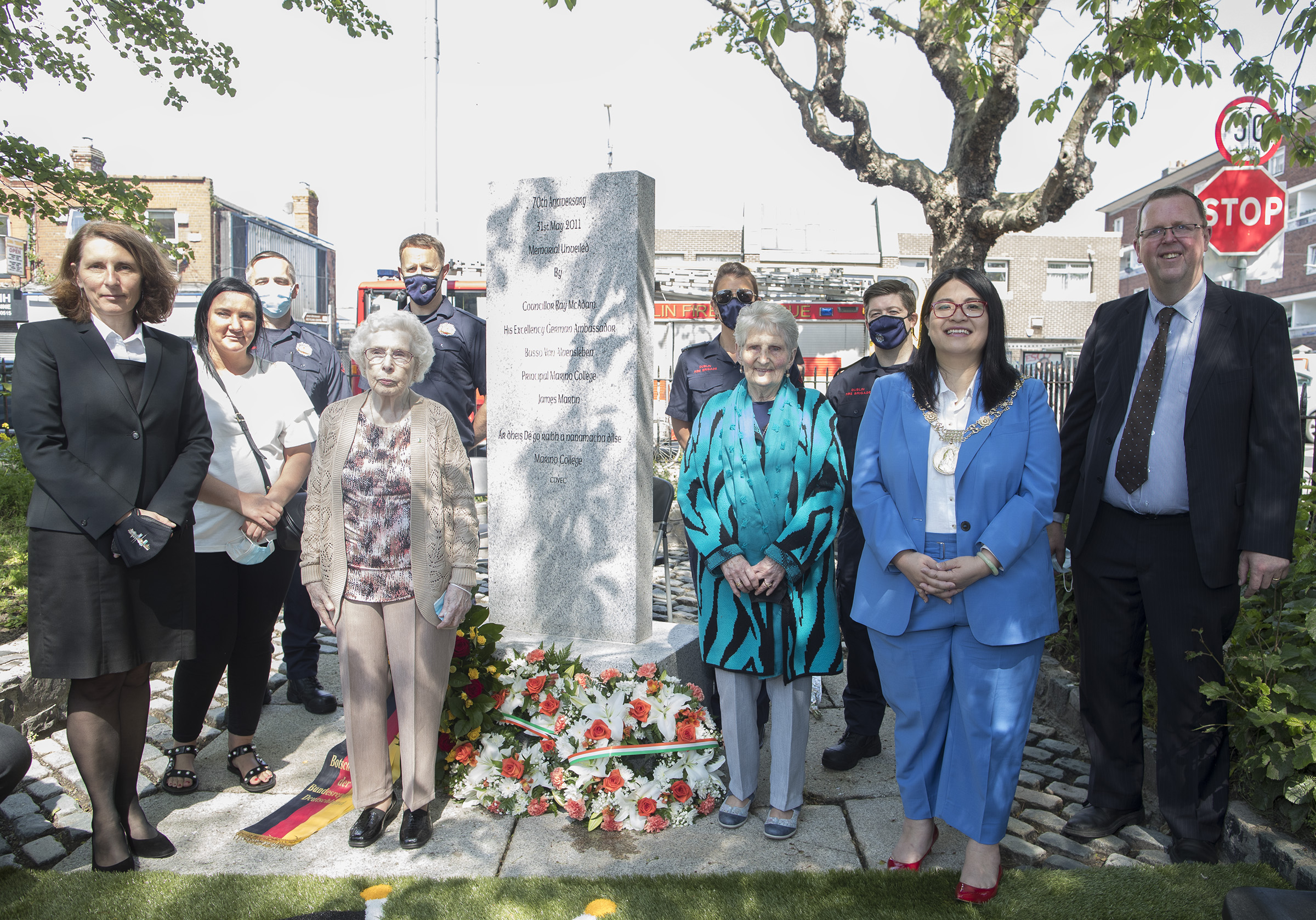 The 80th Anniversary of the bombing of North Strand was marked today with a number of activities organised by The North Strand Bombing Commemoration Committee. The ceremony was held to remember and celebrate the 28 people who lost their lives in 1941 and to recognise this significant event as part of the history of Dublin city.

Dublin’s Lord Mayor Hazel Chu was joined by Her Excellency Deike Potzel, German Ambassador to Ireland for a wreath laying ceremony at the North Strand Bombing Memorial in Marino College of Education, close to where the bombs landed. They were joined by Mick Rafferty, spokesperson for the North Strand Bombing Commemoration Committee, Councillor Mícheál Mac Donncha,  Chairperson of the DCC Commemorations & Commemorative Naming Committee and two witnesses to the bombings, Gladys Langan and May Dunne.

Following the ceremony 28 miniature sailboats, made by the East Wall Skiff Rowers with the East Wall Men’s Sheds, were launched in memory of the victims onto the canal by Charleville Mall; each boat bore the name of one of the deceased.

Two exhibitions dedicated to the bombing, comprising of images, text and short videos compiled by the North Strand Bombing Commemoration Committee and Dublin City Councils Library Service were unveiled on Charleville Mall. Both are available to view over the coming week in the library and local shops.  Dublin City Libraries has launched a new dedicated website, www.northstrandbombing.ie which tells the story of the bombing through a specially commissioned film, as well as photographs of the aftermath and the stories of people who were there.

A number of additional activities organised by The North Strand Bombing Commemoration Committee will take place across the city on Monday to mark the event, including video presentations, a searchlight display and a live stream performance by The Dublin Concert Band.

Lord Mayor of Dublin Hazel Chu said, “The North Strand Bombing is an iconic event in the history of our city, one which left an imprint on families and individuals for generations. It is an honour to be here today to commemorate the bombing and pay our respects to the 28 Dubliners who sadly lost their lives on the night of May 31st, 1941. We also remember those who were injured or lost their homes on that fateful night, and pay tribute to all involved in the search-and-rescue efforts and clean-up operation after the bombing.”

Her Excellency Deike Potzel, German Ambassador to Ireland, stated, “The North Strand bombing brought death and suffering to the inhabitants of the North East Inner City eighty years ago. I wish to extend my deepest sympathies and respect to the survivors and families and friends of the victims. 80 years on, we are gathered here today united in the firm believe that it is important to remember – in order to build and preserve a shared future in peace. And to jointly continue to say: No more war! To keep saying: Never again!”

Mick Rafferty of the North Strand Bombing Commemoration Committee noted the importance of commemorating these events as part of the history of the Dublin, stating, “We have come together and organised a series of activities to commemorate this tragic event in the history of the North East Inner City, as it shows the resilience of the people and the strong community ties that bind them which remain evident to this day. We remember the lives lost in the blast, but also pay tribute to the spirit of Dubliners and the strength of our local community.”

Cllr Mícheál Mac Donncha, Chair of the DCC Commemorations & Commemorative Naming Committee commented, “The impact of the bombing on the 31st of May 1941 was strongly felt across Dublin city, as it resulted in the death of 28 people, injured over 90 and caused the destruction of 300 houses. We still feel the impact of the bombing 80 years on, which is why we have come together to commemorate the event with a series of activities in the area and remember the impact it had on our city.”

“We are heading towards generation after generation experiencing preventable...
Scroll to top