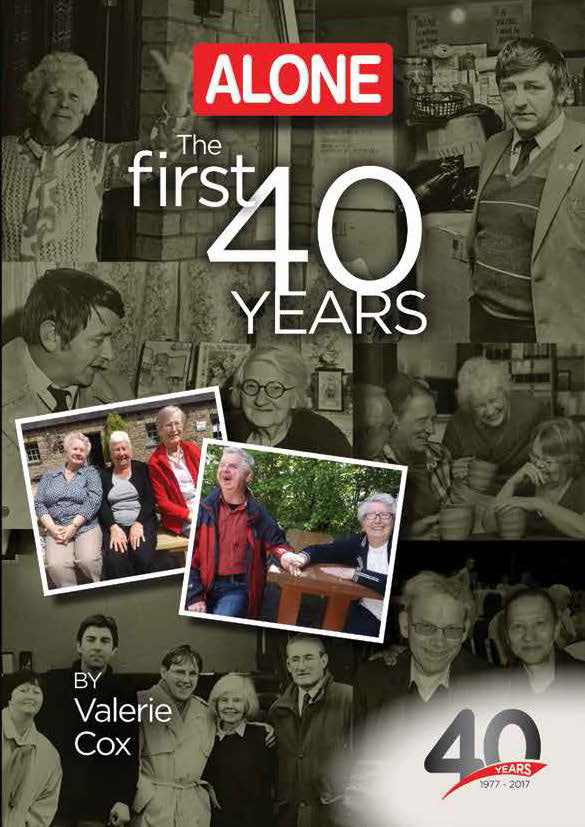 A new book on the history of ALONE, the charity that supports older people to age at home, was launched yesterday evening in the National Library of Ireland, Kildare Street, by Minister of State at the Department of Health Jim Daly T.D., who has special responsibility for Mental Health and Older People.

Written by author and journalist Valerie Cox, ALONE: The First 40 Years tells the inspiring story of the early years of ALONE, from Willie Bermingham’s selfless dedication to the people who followed in his footsteps, as well as the new challenges and issues faced by the charity today. The book is also a memory of the poverty, isolation and housing conditions endured by many Dubliners throughout the last forty years. 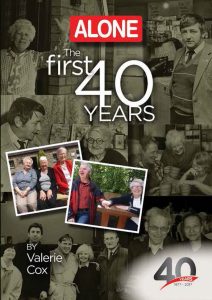 The book records the founding of the charity in 1977 by young fireman after he discovered the bodies of three older people in their homes. It also chronicles the charity’s achievements including the housing complexes it built and the thousands of people who have been befriended by the charity’s inspiring volunteers.

Speaking at the launch in the National Library of Ireland, Minister Daly said “ALONE was founded in 1977 as a response to the desperate issues faced by older people in the city. Today, ALONE continues to provide a very valuable service to older people throughout Ireland who find themselves isolated and alone. I am delighted to be launching this book tonight in celebration of such an important and historically significant charity.”
Sean Moynihan, CEO of ALONE, commented, “We would like to thank Valerie Cox for undertaking this project and producing such a fantastic book that records the challenges and achievements of our organisation. This is also a story of the joy and laughter between people, which friendship and support brings.”

He also thanked the Minister for his attendance, “I would also like to thank Minister Jim Daly who we are working closely with to make real changes for older people at an individual, local and political level, his attendance tonight demonstrates his commitment to older people in Ireland.”

Valerie Cox, author of ALONE: The First 40 Years, said, “Working on this book gave me a firsthand account of the issues faced by older people in Ireland – whether it is loneliness, a lack of support, or housing. A lot has changed since 1977, but ALONE is still needed today more than ever. This book is dedicated to the unsung heroes of ALONE, those who continue to volunteer, donate and work to support the older members of our communities.”

A number of older people who use ALONE’s services and feature in the book were also present at the launch. Aideen Archibold, a tenant of ALONE’s housing with supports, said, “I am so grateful for the work of ALONE. They’re such helpful, kind and cheerful people who also organise various events for us throughout the year. The work they do is so necessary, and thanks to this organisation, I am very happy to have somewhere in Ireland that I can call home.”

Sean Moynihan concluded, “Tonight is a celebration of ALONE and the people involved in the charity’s journey so far who have never forgotten its ethos – to support older people in our society. Together we will work with all parties to achieve our vision to support older people to age at home and be valued and respected in the communities they live.”

‘We owe it to our older people’