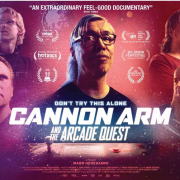 The feel-good Danish documentary CANNON ARM AND THE ARCADE QUEST is set to hit cinemas across Ireland and the UK on Friday 24th June.  The film will then be available across digital platforms from Monday 27th June.

The debut feature from Mads Hedegaard about friendship and arcade games was recently awarded the Special Jury Prize by the Dublin Film Critics Circle at the Virgin Media Dublin International Film Festival in March.

Kim Cannon Arm – father, grandfather, laboratory technician, legend.  With the help from his friends at Bip Bip Bar the documentary follows Cannon Arm’s attempts to be the first in the world to play an arcade machine from the early ’80s for 100 consecutive hours.  With its collection of heroic outsiders, dreams about legendary world records, quirky hairdos and brilliant players, the film praises solidarity and the attempt to achieve the sublime.

The crowd-pleasing film, loved by critics and audiences alike, has screened at numerous film festivals worldwide and picked up the Audience Award at the prestigious Hot Docs Festival in Canada.

CANNON ARM AND THE ARCADE QUEST was produced by Katrien Sahlstrom and Good Company Pictures with support from New Danish Screen, DR and TV2 in collaboration with SVT.

“Ambassadors” to the Travel Industry presented with Travel Counsellors...
Scroll to top