IT IS IN US ALL, the directorial debut from Irish filmmaker Antonia Campbell-Hughes will open in Irish cinemas on 23rd September.  The feature drama which was filmed on location in Donegal stars Cosmo Jarvis (Persuasion, Calm With Horses), Claes Bang (The Northman) & Rhys Mannion.

When Hamish arrives on the soil of his mother’s birth, she is felt instantly. As he travels further into the wild Irish country, a shocking car accident rips him apart, shattering his clenched control. A beast broken, he finds himself lost in the world of his long deceased mother. But when he starts to receive visits from a teenager who was also involved in the crash, Hamish begins to experience the electricity of living.

Speaking about its cinema release, Antonia who wrote and directed the film said “I want people to feel magic. This can come in the form of discomfort, fear, recognition… It is to awaken a sensation that has been absent or is unrecognisable.”

“I wrote a story about how to explosively collide these two halves. And how that collision could alter the composition of the other, in a suspended reality/ environment. I made a film to explore my own curiosities and to create a textured visual to show my own experience of life. Ultimately, we all try to find methods to communicate. Some connect naturally, some must find alternate tools. My work is my tool.   Receiving the ‘Extraordinary Cinematic Vision’ Jury award at SXSW w 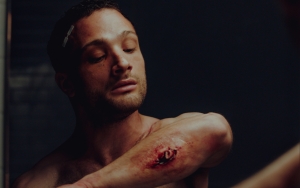 as a huge affirmation for what I set out to communicate through visual.”

She continued:  “I wrote a Northern Ireland of my heritage that I observe and champion as a dislocated member. A place, like so many, that has a profound impact when it is of our blood, but also completely foreign.”

The film had its world premiere at the prestigious SXSW festival in the US this year where it won a Special Jury Prize for Extraordinary Cinematic Vision.  Antonia was also selected earlier this summer as one of Europe Film Promotion’s Europe! Voices of Women In Film programme at the Sydney Film Festival which highlighted 10 European women filmmakers to watch.

IT IS IN US ALL was produced by Emma Foley and Tamryn Reinecke for Pale Rebel Productions (Redemption of a Rogue) and Conor Barry for Savage Productions (The Cellar, Pilgrimage).  The film was funded through Screen Ireland’s inaugural edition of its POV scheme which champions distinct Irish female voices with a passion to tell stories on the big screen.

IT IS IN US ALL

“As a debuting director, Campbell-Hughes proves she has style to burn”

“Hamish wrestles with light and darkness throughout Campbell-Hughes’ story, and the film’s mind for character and space makes for an intricately haunting debut”
Nick Allen, RogerEbert.com

“Reverential, haunting, and it will loom over you like a dark cloud once the credits roll… Campbell-Hughes displays her keen eye for composition, a deep understanding of the soul of humanity, and secures herself as a director to keep an eye on”
Maggie Lovitt, Collider

“Strikingly atmospheric… A hyper-visceral portrayal of manhood in its purest unrestrained form, is anchored by the force-of-nature turn from its superlative star Cosmo Jarvis. Intoxicating to the senses, this film boasts an indomitable vitality, a zest for life so uncontainable it brims with mortal danger”
Carlos Aguilar, Indiewire

ALONE encourage public to check in on older neighbours, friends and relatives...
Scroll to top